On Sunday November 9, 2014 the Millinocket Elks put on their annual Veterans Appreciation Dinner at the Lodge. About 75 Veterans and their spouses and widows attended. The oldest Veteran was Goody Bradbury at 94 years young from World War II, Dana Brown, also from World War II at 93 years young and David Cram the youngest at 38 years young.

There were door prizes given out to lucky ticket holders as well as the oldest and youngest veteran. State Champion Medway Middle School's Show Choir participants from this past spring's competition performed patriotic songs and poems under the direction of Jessie Page. They all were treated to a wonderful ham dinner put on by the kitchen crew and servers led by Tim Beaulieu; Jean Plourde, Joyce Beaulieu, Ron Darling, Ed Craig, Rod Cyr, John Allen, Lynn Conary, Bobbie Allen, Betty Jo Austin, Ellen Van Dine, Heather Craig, Rick Moscone, Angela Levesque, and Rhonda Madore. Chaplain Dick Brown said the prayer, and the other officers Exalted Ruler Ron McInnis Sr., Everett Hale Esquire, Jeff Neal, John Nicholson PER, Rick Moscone PER, Dick and Becky Brown, and Gerald "Slugger" Barnes helped with set up and take down of the hall.
"So Long as there are Veterans the Elks will never forget them." 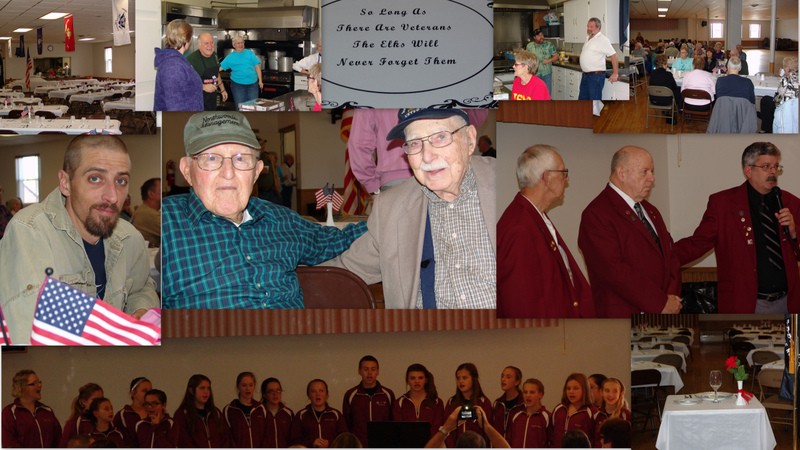